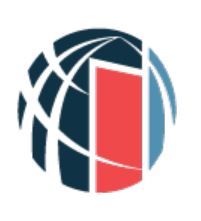 IFMA MSP’s Communications Committee is dedicated to bringing educational, interesting topics to our membership in emails, on social media, and with our quarterly newsletters. We have shifted our quarterly editions to weekly email blasts called the IFMA MSP Weekly Digest!

Click through below to see our archive of past newsletter editions.

The presentation by Allianz Field’s General Manager Justin Borrell and Director of Operations Sam Nolden included the facility standards required to meet the needs of Major League Soccer, to the elaborate infrastructure required for broadcasting televised games, to the design intent of the multicolored seat throughout the stadium bowl.  Beyond the building general building design, the Allianz Staff shared the design features that have impacted the maintenance and upkeep of the building, providing the program attendees an inside look at the day-today and game-day happenings the staff have managed since opening day. The staff shared the project’s sustainability goals including 2.6 acres of public green space, a bird safe stadium skin, and the rainwater recycling system that reclaimed 1.9 million gallons in water last year!

After the informative presentation the IFMA participants were provided a guided tour through the stadium where the vibrant and varied fan experience was discussed. Throughout the tour the Allianz Field staff pointed out the facility details that included portable grow lights on the soccer pitch, temporary ventilation to refresh the empty stadium and turf, to variety of seating and standing areas throughout the stadium.  Concluding the tour was a visit and photo opportunity of the surprisingly intimate home team locker room, which hasn’t been open to tours until just recently, what a treat!

After the tour attendees returned to the Brew Hall which offers a panoramic view of the stadium, soccer pitch, and 96 beer taps. Participants enjoyed appetizers and drinks while networking and enjoying the beautiful space and setting. As the last Chapter meeting before the summer break, IFMA Volunteers were recognized for their contributions over the past year, as well as the benefits of being an IFMA volunteer. A big thank you to this year’s volunteers, IFMA would not be possible without you!

The StarTribune described the new Minneapolis Public Service Building as “one of finest works of contemporary architecture that downtown has seen in years, perhaps generations.” The building was created to promote innovation, collaboration, and engagement among employees and with the public. Its Public Service Center was designed to embody a customer centric experience that is welcoming and easy to navigate. And its focus on sustainability and wellness contribute to a more vibrant and healthier City. 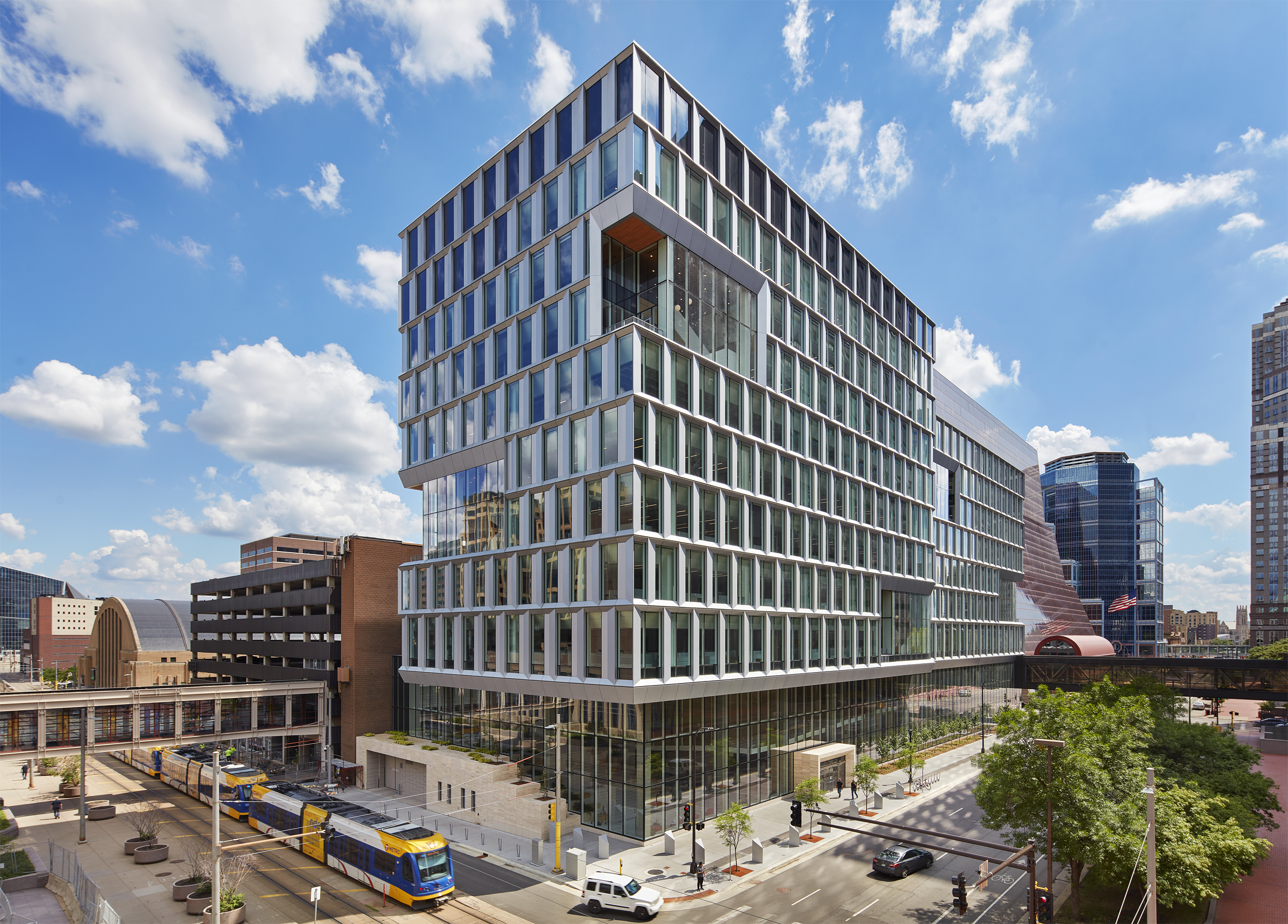 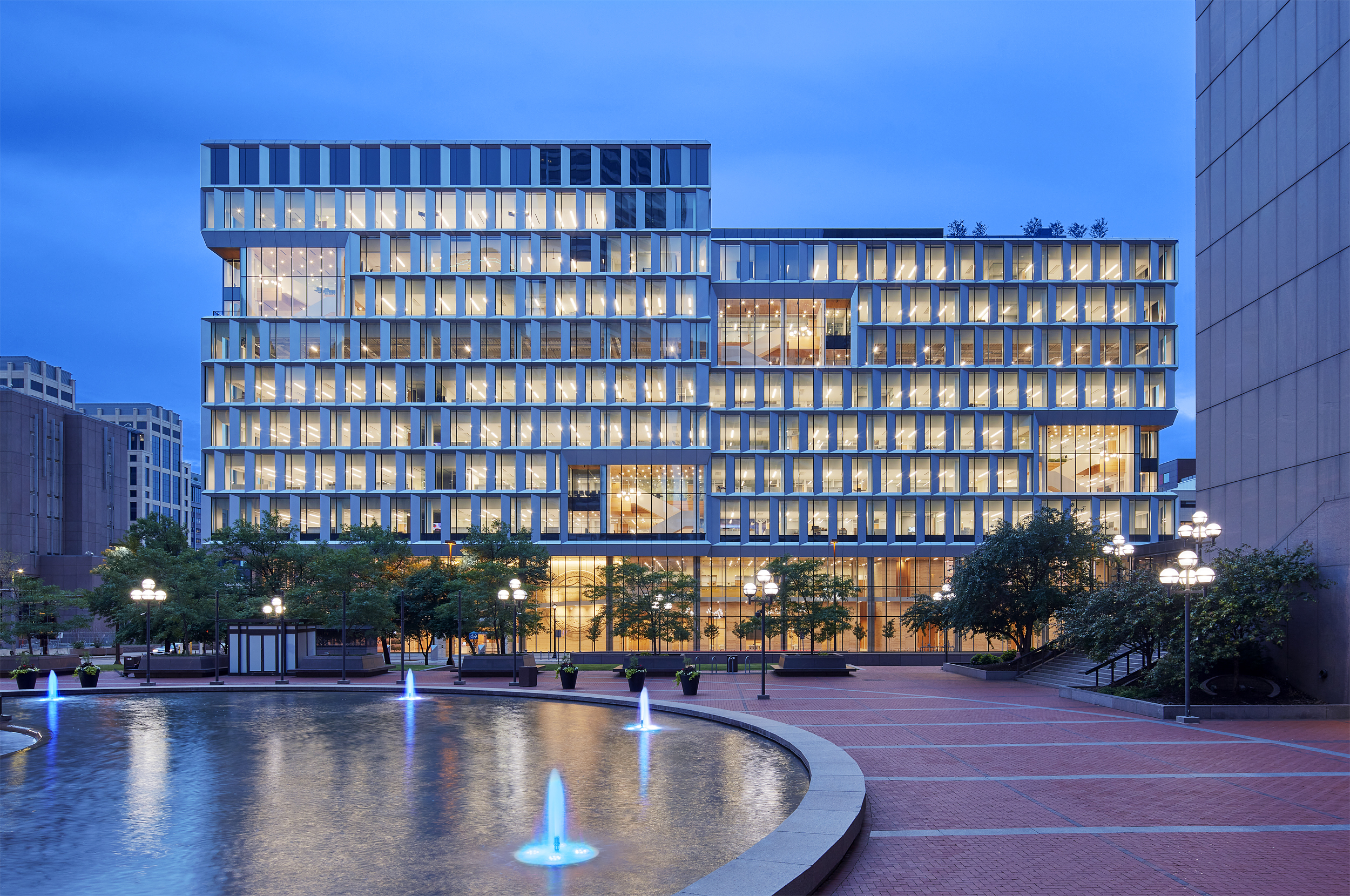 In November, IFMA MSP was thrilled to welcome back Vik Bagnia and introduce our chapter to Eva Kovac, who discussed emplopyee retention despite uncertain times with our attendees. Many of us have either returned to in-person office environments or been prepped on how teams will do so. This has added many layers to our growing job descriptions. This presentation offers insight into what other countries and large companies are putting in place to keep their employees safe, but also strategize productivity. There is a significant change to FMs’ job descriptions after the past few years, and this presentation highlighted how organizations can take care of their employees with new perspectives.

While there is not a PDF slide deck to view, we highly recommend viewing the recording.

Login here to view the November Chapter Webinar Materials. This is member only benefit.

We were thrilled to welcome back Rex Miller to continue to conversation from our June Chapter Meeting Webinar on Workplace Readiness, and how each individual’s care for themselves and their work life balance will effect our return-to-office campaigns many companies have begun or will begin shortly in the coming months. Rex spoke on his experience with national clients, gave specific tips on how to navigate stress in the workforce, and provided feedback on how the Facility Management profession can succeed in the ‘uncertain times’ we’ve grown accustomed to. 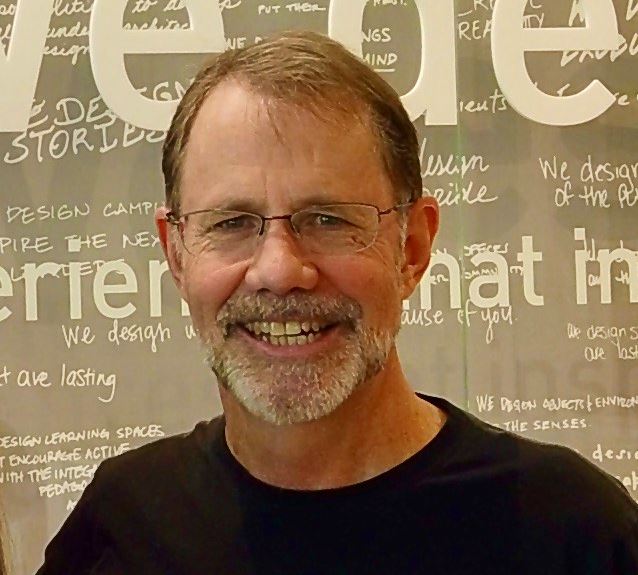 While there is not a PDF slide deck to view, we highly recommend viewing the recording.

Login here to view the September Chapter Webinar Materials. This is member only benefit.

Our August Deep Dive was a panel discussion all about how to navigate the world of unassigned workspaces as many companies look to bring employees back to the office with a more flexible approach. We were joined by Marcia Droege of Land O’ Lakes, Robyn Kaiser of UnitedHealth Group, and Kari Smith of RPS Architects. As a group, there was very insightful discussion on meeting the needs to many different generations of employees, different fields of work within the same company, and advantages and disadvantages to flexible work areas. 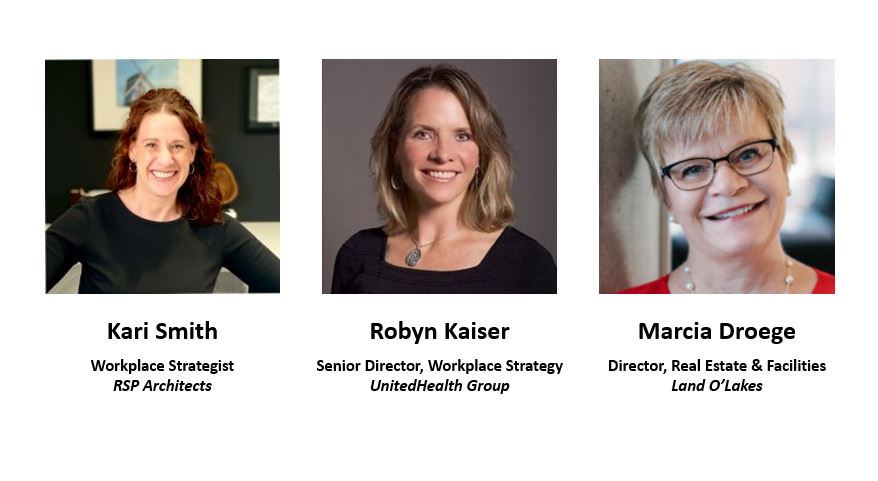 Login here to view the August Deep Dive Materials. This is member only benefit.

IFMA MSP welcomed longtime colleague and guest speaker Rex Miller in June to discuss the steps in rebuilding a stronger workforce after the past year. He discussed how to build off of Post Traumatic Growth, and six disciplines you can apply in your daily life to guide you through this next season of re-opening, returning to the office, and stepping away from the screens. 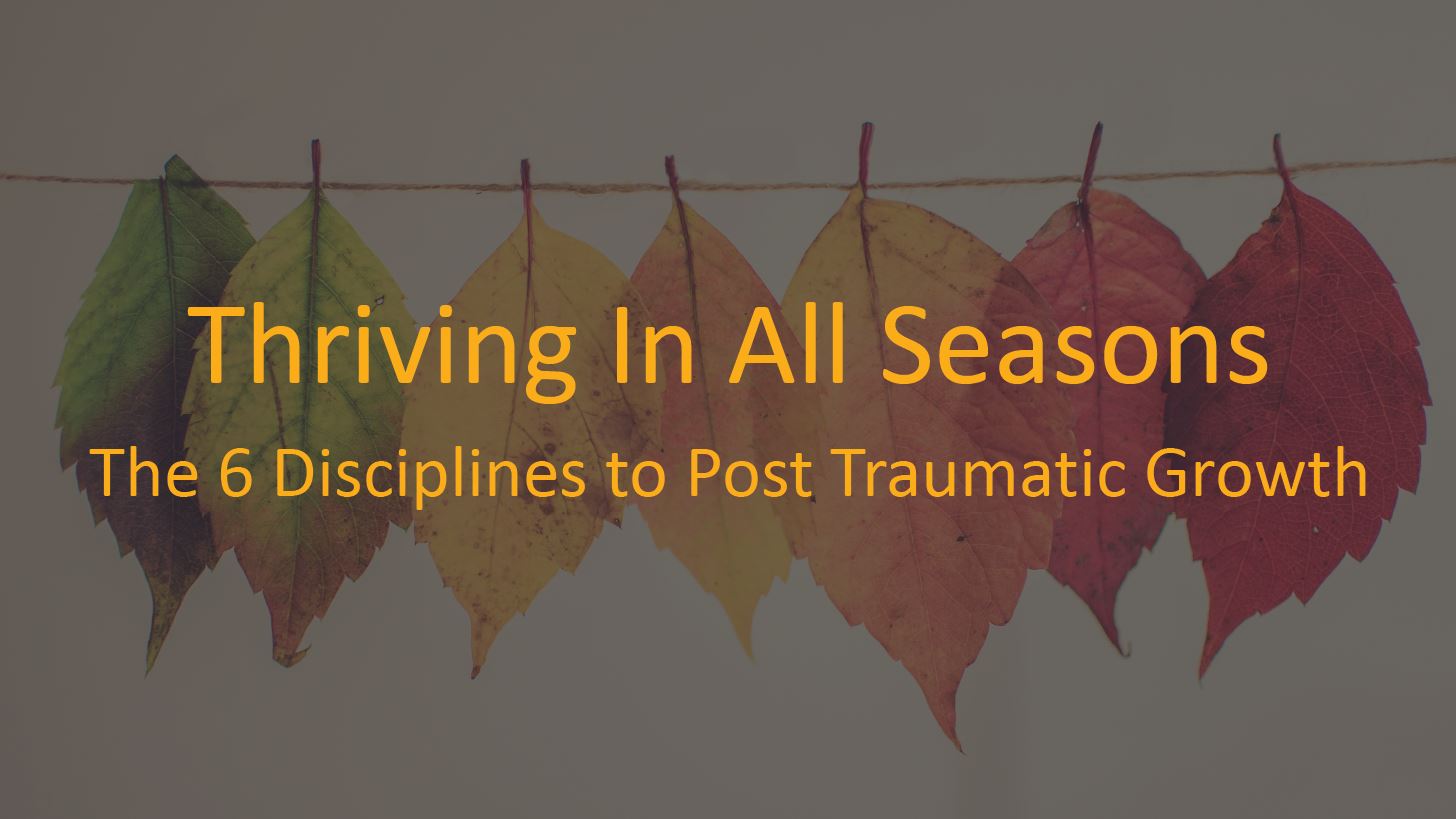 Login here to view the June Chapter Meeting Materials. This is member only benefit.

As change leaders with the City of Minneapolis, Dawn Baker and Vincent Therrien are actively guiding the successful consolidation of City employees from seven downtown locations into to the new Public Service Building and renovated City Hall. The significance of this undertaking did not only include preparing and equipping individuals for the geographic and physical changes, but the cultural, policy and process changes required to complete the transformation of how public services would be delivered to the community. We were thrilled to welcome them for our April Chapter Meeting to discuss applying change management principles in the FM professional world. 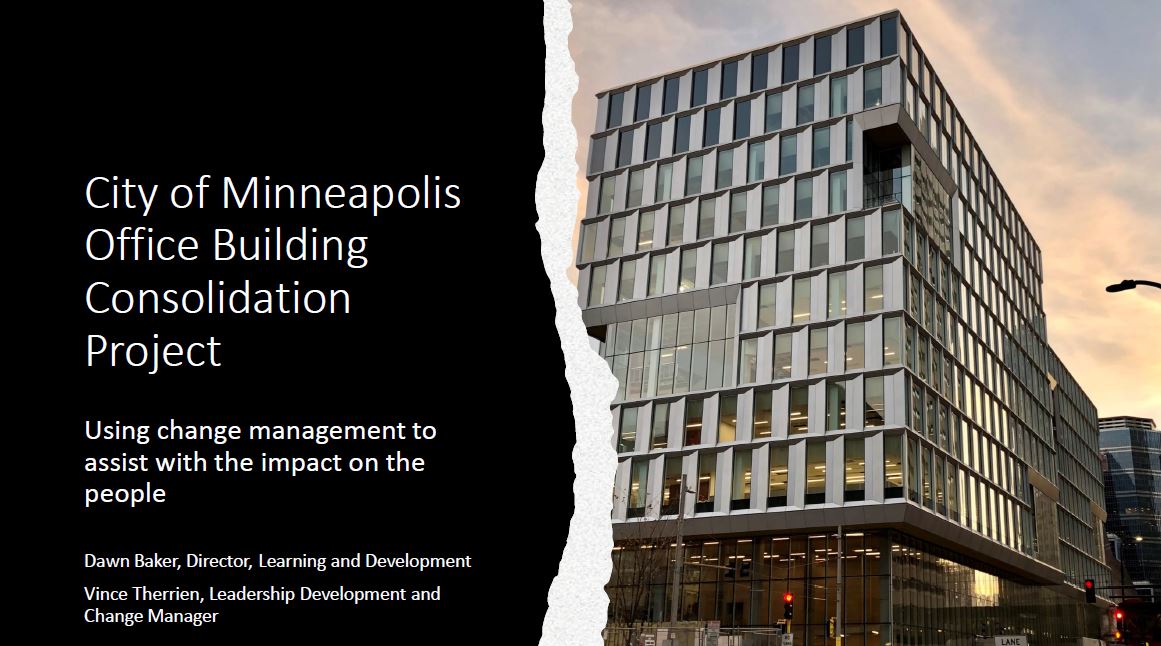 Login here to view the April Chapter Meeting Materials. This is member only benefit. 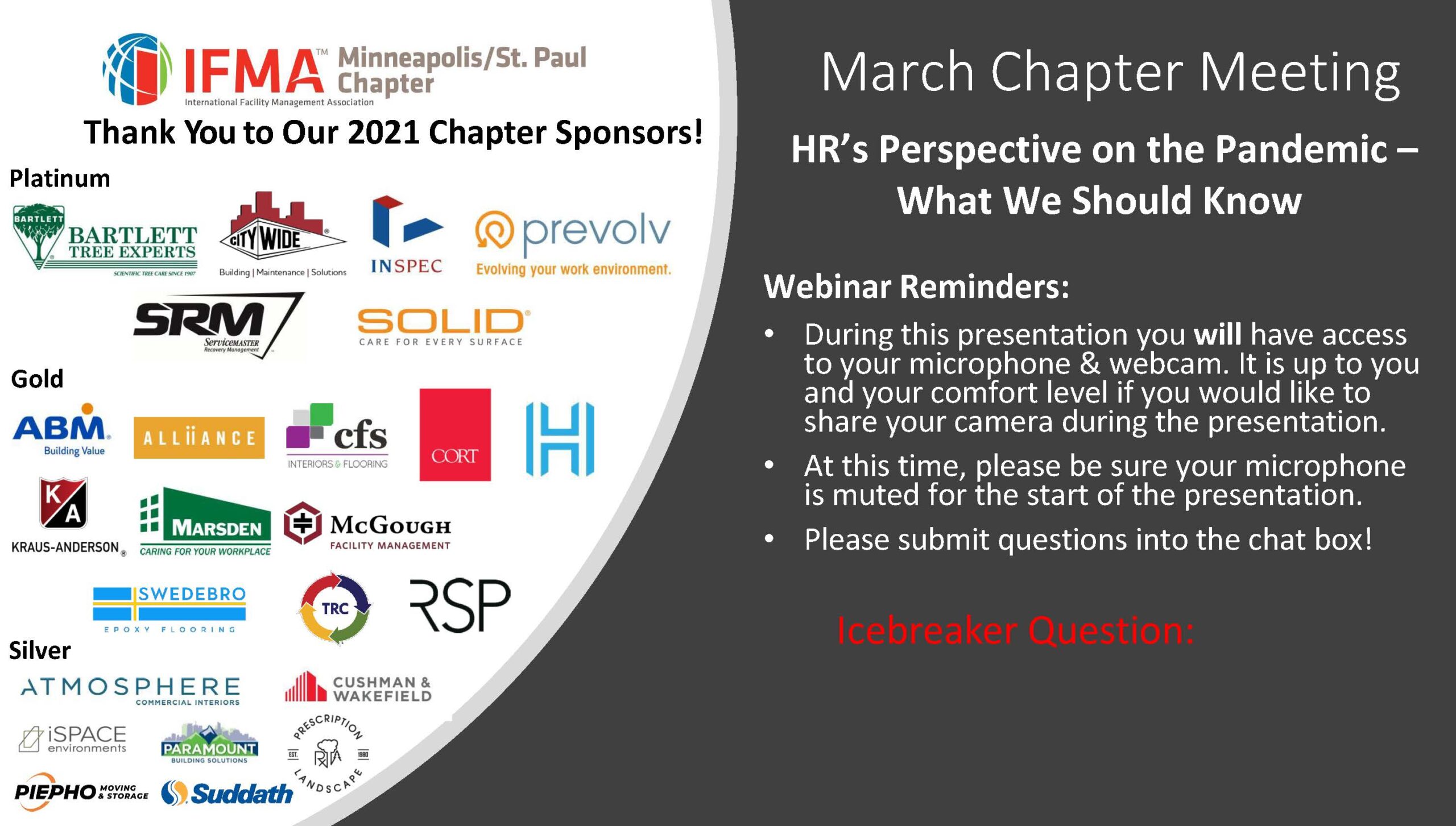 Login here to view the March Chapter Meeting Materials. This is member only benefit. 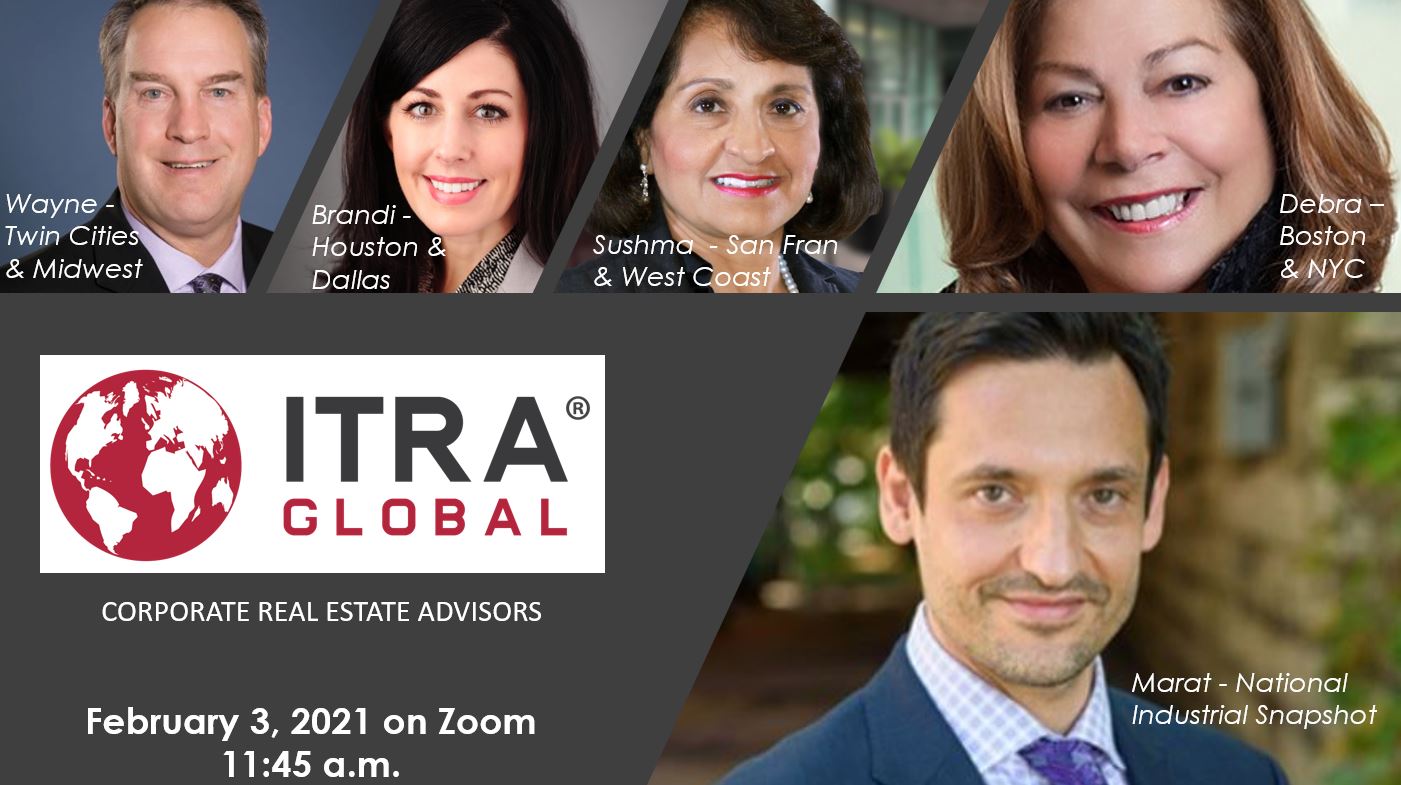 February’s meeting, presented by ITRA Global, presented a U.S. Corporate Real Estate outlook for 2021 and beyond. The primary theme in most of the office markets covered was negative office absorption, increasing vacancy rates and improving fundamentals with respect to businesses leasing office space.  But the panelist also touched on the industrial/Warehouse market, Work From Home and Return to Work office trends, as well as the increase in construction costs.

Login here to view the February Chapter Meeting Materials. This is member only benefit. 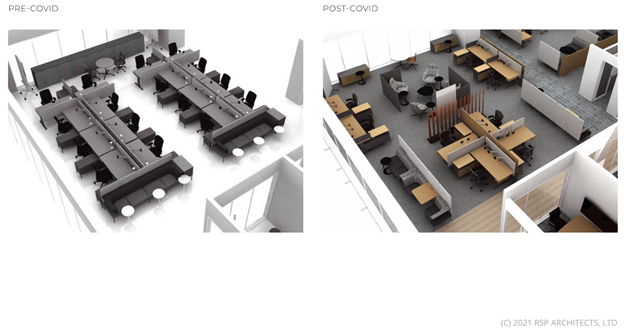 In January, RSP’s Dawn Brown, Senior Associate at RSP, and Alissa Franconi, Associate Principal and Studio Design Lead at RSP, discussed their recent post-pandemic experience with clients (prominent healthcare, public utility, and others) and how it has provided unique insights into developing a successful Return to Office strategy.

The future of work is Resilient!  Now it’s time to discover why the office matters.

Login here to view the January 2021 Chapter Meeting Materials. This is member only benefit. 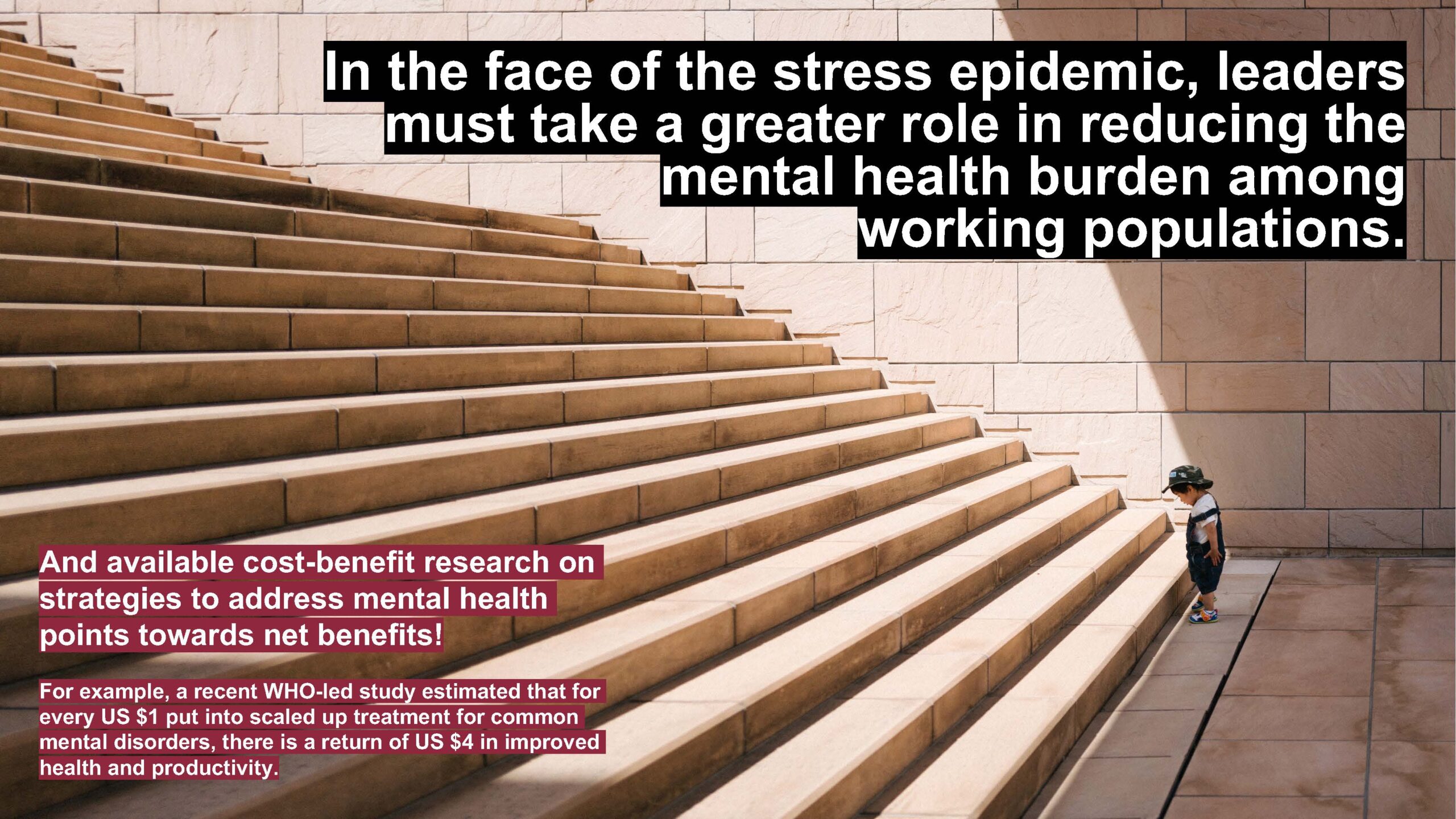 During our November 4th program, speaker Amy Rosen stated that the mental health of an effective organization is a tangible part of its asset value. Citing the World Economic Forum’s “The Future of Jobs” report, “creativity is one of the top three skills that workers need in 2020.” Creativity is a cognitive function, a brain skill, and a principal target of the most disabling of all health problems afflicting working populations – depression, high blood pressure, and anxiety.

Amy reinforced how prevalent mental health disorders are and everyone’s vulnerability to this chronic disease, which has both physical and psychological effects. Risk factors that drive mental health include fear, frustration, rumination, threat, anxiety, and loss. An estimated 264,000,000 people globally suffer from depression, which is only one of many forms of mental illness. Gen Z, recent college graduates and younger, are the loneliest generation surveyed.

Risks to mental health in the work environment include:

Login here to view the November 2020 Chapter Meeting Materials. This is member only benefit. 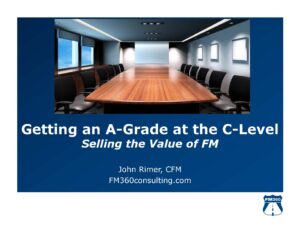 John Rimer, CFM, is the Owner/Principal of FM360Consulting.  With over 23 years of FM experience as well as being an IFMA Qualified Instructor, John presented “Getting an A-Grade at the C-Level; Selling the Value of FM” to our chapter for our October Chapter Meeting.  Here is a brief recap of his presentation.

The current State of Facilities is that we are dealing with Deferred Maintenance, being asked to do more with less and being more reactive with maintenance because of the above AND the skilled labor shortage.  This means we need to be creating a business case now more than ever.

We are always selling whether it is selling your operating budget, capital budget and all other business cases.  Here are some tips to helping you prepare your business case:

Login here to view the October 2020 Chapter Meeting Materials. This is member only benefit.